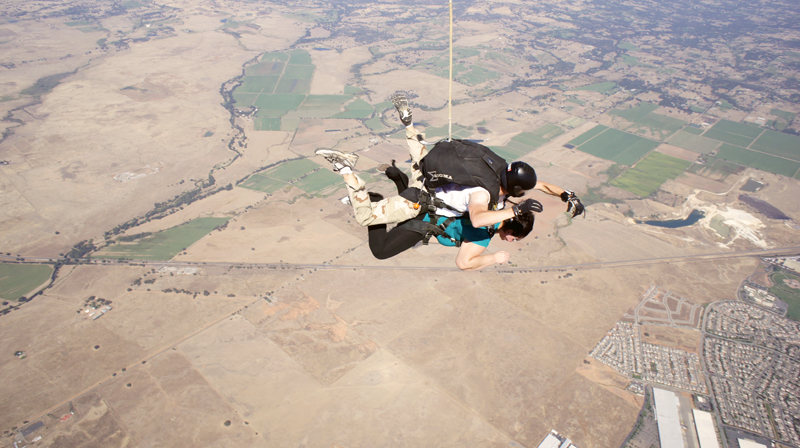 So that definitely happened last month.

I’ve been talking about crossing skydiving off of my bucket list for AT LEAST 10 years now and I can’t even begin to tell you how amazing it felt to cross that one off finally! I had purchased a Groupon in May on a whim when I had some extra money, otherwise I’m positive I would have put this off til my 30th birthday.  The day before my twentyCOUGHeighthCOUGH birthday I loaded up my extremely hungover BFFL Diana and we headed out to Lincoln (about 40 minutes from Sacramento) to Skydive Sacramento. I’m actually really surprised that I wasn’t more nervous because looking back on that video my palms get all sweaty and my heart races a bit. I was absolutely fine right up until the moment I realized I was about to leap out of an airplane 13,000 feet up…which was about 3 seconds before we actually jumped out, and by then it was too late for regrets. I’m so glad I upgraded to the higher elevation because I actually had time to process what the heck was going on as we were falling at 120+mph for a good 60 seconds.

Kurt, my jump instructor was a really cool guy, he is in the military (where he started skydiving) so this must be a cake walk compared to his day job I’m sure, by the time he had gotten to me he was on his 8th jump for the day. As soon as he pulled the cord and we could actually have a conversation all I could say for the first few minutes was “HOLY SHIT, YOU DO THIS EVERYDAY?!” I’m pretty sure I said that repeatedly because the adrenaline rush is like no other, not to mention the force of deploying that parachute on your body (if you could only see the bruises). I can see why he would do it, adventure aside, the ride down is absolutely beautiful. We could see pretty much all of the Sacramento area and you could see the Sutter Buttes, the Sierras, some distant clouds, and we were floating higher than birds. It was pretty breathtaking, I wish I could have taken my camera up there.  Next time I’m definitely strapping a GoPro to my head!

I’m already looking forward to my next dive, and I’m legitimately considering going through their “Accelerated Freefall” program where you do a jump school and learn to dive alone and become certified.  Now that I know what to expect I think I could have a lot more fun with it. I definitely made a couple mistakes that I won’t be repeating. Lucky for you all you can benefit from my missteps!

DON’T pig out- just in case

DON’T wear yoga pants and a v-neck if you’re busty like me. the yoga pants offered ABSOLUTELY no protection from those bruises and my boobs practically flew out of my shirt

DO bring a friend to root you on

DO upgrade to the higher elevation jumps and get the video & photo packages!!

DON’T be scared and silent, there was a quiet girl on my plane and she practically got punted out of the plane without warning probably because she was so freaked out already, I gasped when they jumped because no one expected it so fast, normally you count down lol

DO remember that as long as you follow the rules and follow the instructions your instructor gives you are  SAFE. you have a better chance of dying driving to the jump zone than you do jumping out of an airplane with a certified instructor strapped to you and 2 parachutes.

DON’T let the waivers of liability and the video they make you watch scare you off.

DO GO!!! Just do it!! It’ll be the craziest thing you do all year and everyone will think you’re a total badass even though all you did was let someone throw you out of a plane.  :)