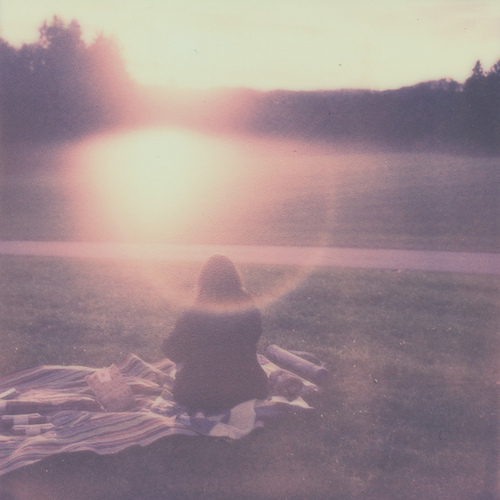 A while ago I mentioned how I had finally found some Polaroid film for my 2 instant cameras, the Impulse and SX-70… well I finally got around to experimenting with the instant film made by the Impossible Project. At first glance, it seemed easy enough to use, even though I had never shot with my SX-70 before and had no idea what this whole ‘lighten/darken’ wheel was about. The thing about the Impossible Color Shade instant film is  that unlike the old Polaroid film I used before, you have to shade it from the light immediately or risk a really bad exposure. This whole deal presented its own set of problems, not to mention the fact that I was still experimenting with the exposure controls on the camera. And before you speak up and say “didn’t you read the tutorials on how to shade your film Val?” Yes, yes I did and I wasn’t about to go creating a friggin box to hang off my camera to collect the polariods as to not expose them, I used the card through the slot method (which totally failed for me), and then resorted to just being extra careful to shade it with a card as soon as it spits it out. Needless to say between my experimenting, the girl scouts eating up a few shots, and getting the cover just right so I wouldn’t expose the film incorrectly- I’ve only gotten 1 shot out of it I’ve liked. Sad face.

I have about 4 more pictures left in this pack and then thats it until payday, so hopefully now that I kind of understand how to get a good shot outta this stuff, I can post some real results. Until then, here are a few of my favorites from the Impossible Project Color Shade gallery on flickr.

I think the next order of film I’ll do is the Silver Shade, its a black and white instant film which is pretty cool. I still want to experiment with some emulsion transfers (remember that movie Crazy/Beautiful where Kirstin Dunst is obsessed with taking Polaroids and sticking them in a notebook- those were emulsion transfers). Have you used Impossible film yet? How was your experience? I’d really like to hear, I feel like I’m the only one who had trouble getting it just right.

2 thoughts on “I now realize why its called Impossible”