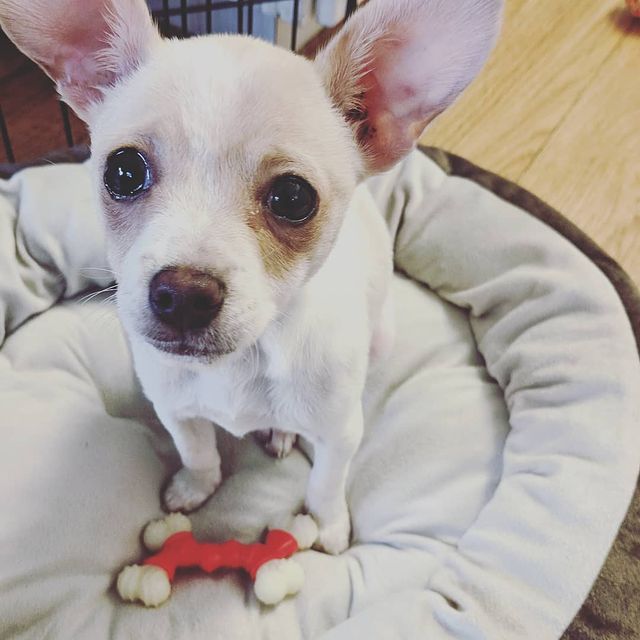 So today I met with an animal communicator named Lilly Ludwig of Animal Intuitive. Basically, she’s an animal psychic medium. So not only is she able to communicate with living animals, but also those who have passed on (as well as humans).

I booked a short 30-minute session with her so I could connect with my pup Odie and get some insight into some of the random pains he’s been having lately. Before you go there- I have already consulted his vet, multiple times, and even paid for an expensive x-ray that showed nothing but a little constipation. Lilly is not a replacement for a vet or a diagnosis, and also this wasn’t the sole purpose of our meeting either. I also wanted to know how he’s been coping with the move back to Sacramento, as well as the recent breakup between me and his pup daddy.

As for his pain, she was able to ascertain that he’s experiencing daily bloating and gas and that he suspects, yes HE suspects that it might be something like IBS. He also told us that beef does not agree with his tummy and he absolutely hates vegetables. Good to know, pup, noted.

As for the breakup, I won’t go into many details as to respect my ex’s privacy, but she did say that my pup was happy that things are settled between us and that he wants to help me process everything. So sweet. It also explains why when I was down the other day he spent all day by my side despite being bored as hell (he’s still got that puppy energy).

Lilly also mentioned that Odie is still processing a lot of his own trauma from being a rescue dog (she picked up on that I never mentioned a word about it before) and that he just needed a lot of words of affirmation that he’s ok and safe now. She also mentioned how he wants me to do the same for myself. (Ok universe, I am listening ok!) I asked how I can better support him during his healing and she advised me to just hold space for both of us to process our traumas and reassure him he’s ok and not invalidate his feelings. He also wants me to work on being more alpha in our relationship by modeling the behaviors I want to see out of him – less reactive. My sweet sensitive pup is so insightful.

He also expressed how much he likes when I talk to him and to try to make more of an effort to do that. She also recommended that we unplug for a few minutes a day and just spend time with each other kind of like meditating to allow emotions and feelings to transfer through.

Overall I really enjoyed the experience, I felt like it was a really accurate reading of our relationship and bond as dog and caregiver. Lilly’s insights were really authentic and not at all gimmicky (for those skeptics). I would highly recommend booking a session with her if there’s a pet you want to connect with, living or otherwise. I’m really looking forward to bonding better with my pup by providing him with what he needs emotionally and checking back in with her later on to see how that makes him feel.

So what do you think? Would you pay someone to speak to your pet or a passed pet?
Let me know in the comments below!

1 thought on “My dog and I met with an animal psychic.”