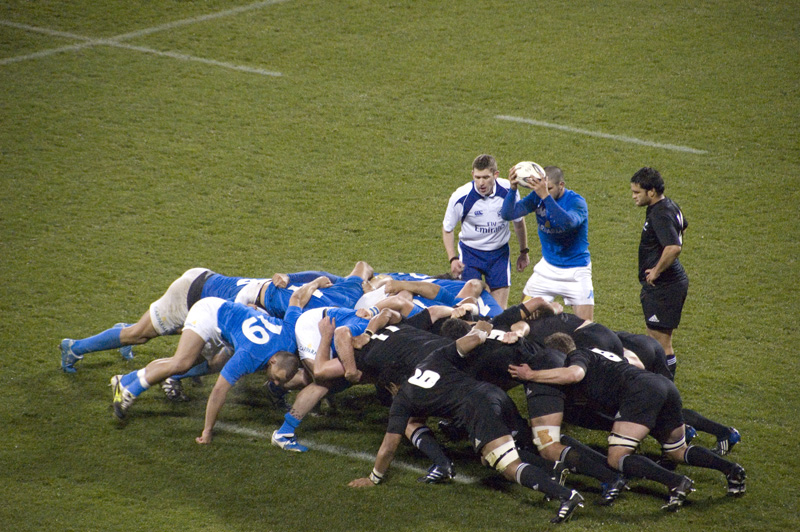 One of the cool things about traveling and staying somewhere an extended amount of time with some locals is getting to experience things that make them…a local. When I was in NZ I had the very lucky opportunity to experience my first rugby match, and of all the teams to see the AllBlacks are the best.

Kiwis love their rugby. Kids start playing at a very young age, much the way Mexicans have their kids in soccer before they can form complete sentences. I’ve never seen so many small children with mullets. What? Did I not mention how on the south island at least mullets are all the rage for mens hairdos? Especially amongst the rugby crowd. I had never seen a mullet look so sexy until I went to that match, those rugby players are H O T T I E S, it helps that theyre pummeling eachother in a very hockey-like fashion, and lets be real, that appeals to some kind of primal instinct in women.

ANYWAY. For being my first match ever live, I loved it. Rugby reminded me of the best of all the American sports. The heckling of baseball, hockey fights, soccer agility and skill, brute force of football. Rugby really is the best of all sports and after that match I realized why those kiwis love it so darn much. I think it helps that the AllBlacks really know how to put on a pregame performance. They flew in some important dude with a FRIGGIN HELICOPTER before the game. They always open with The Haka, which is by itself the most awesome thing I’ve ever seen a group of grown men do in unison, and its a great throwback to the heritage of the people on these islands. And then to add a sense of intimidation a ginormous AB flag/banner thing is flown over an entire section of the stadium, putting hundreds of seats and people in total pitch black darkness for a couple seconds. What a way to kick off a game.

I’d write about the actual game but I know nothing of sports except that in rugby they move forward to score a try but can only pass the ball thing backwards…I’m not a sports-writer guys, cut me some slack. They did however kick some Italian arse, but that was expected, they are the best team aside from South Africa after all.

All in all, I’m really glad that even though it was freezin-balls cold in NZ while I was there, and that infamous Aotearoa weather kept me from getting to travel more while I was there, that I was still able to carve out some time to enjoy the national pastime of Kiwis.