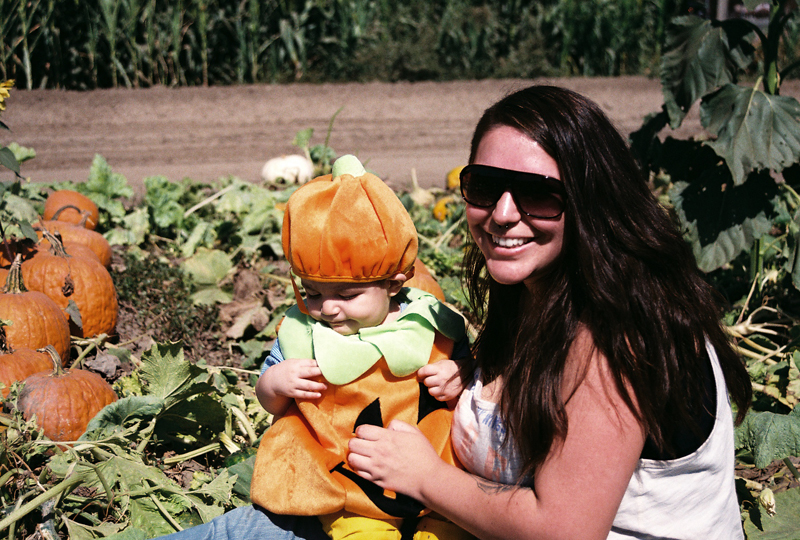 So while I was in Hantucky visiting with Krystal and the kids, we went for a little outing to the nearby pumpkin patch in Visalia, which is about 20 minutes outside of Hanford. Every year Krystal makes it a point to visit a pumpkin patch with Emery and take family pictures in the fields, and this was Carlos’ first visit to a pumpkin patch. I’m so glad I got to be there for his first time. Emery was having a blast playing in the dirt (this kid is hilarious I swear), and I was going to town trying to use up the last of my b&w roll of film I had. Emery, being the little ham she is was taking every opportunity to model for Krystal and I, and Carlos was just taking it all in. We tried to get a good shot of Carlos in this cute little pumpkin outfit in the patch but he just wasn’t really having it, I can’t blame him, I wouldn’t want to sit in dirt and weeds too. It was pretty warm out that day and the we were all getting a little fussy so we decided to take a little breather under the tarps where they ended up having the corn pits. I swear to god those corn pits were totally zen for us and the kids, Emery was making corn angels and me and Krystal were just glad to be out of the sun and sitting down for a minute. After relaxing for a few minutes we decided it was time to go, Carlos was starting to get fussy, we were all hungry, and had to be back in town soon. We ended the trip with a stop at our favorite spot In-n-Out and a relaxing drive back into town. Overall it was a really great day, I loved getting to spend time with my favorite people and doing what I love- taking photos.